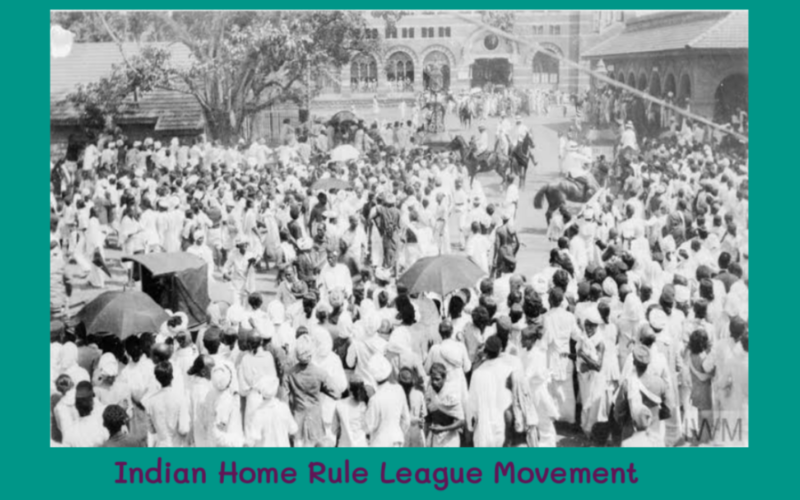 The Indian Home Rule League Movement was begun in British India and was roused by the Irish Home Rule Movement, which fought for Ireland’s self-government inside the United Kingdom. Bal Gangadhar Tilak and Annie Besant founded the Home Rule League in India. From 1916 to 1918, it lasted a long period.

Basically, there were two Indian Home Rule Leagues that were established with the common goal of achieving Self-Government in India.

The government repressed the students, particularly in Madras, where they were forbidden from attending political assemblies. Tilak was charged, but the case was dismissed by the High Court. Tilak was restrained for access into Punjab and Delhi. Annie Besant and her associates George Arundale and B.P. Wadia were apprehended in June 1917.

This sparked widespread outrage. Sir S. Subramaniya Aiyar relinquished his knighthood in a theatrical gesture, whereas Tilak argued for a passive resistance strategy. The repression simply hardened the agitators’ attitudes and strengthened their commitment to oppose the government.

Mrs. Besant, The President of Congress

In light of rising national animosity, Mrs. Annie Besant, who was jailed in June 1917, was later released by the British government. It was at this time that the popularity of Mrs. Besant’s personality and the Home Rule movement were at their peak.

She had contributed new aspects to India’s war for independence over the preceding three years, aspects that had caught the attention of an ever-widening audience in India and the British Raj. As a result, Mrs. Besant was chosen as the President of the Congress at Calcutta Session (1917). The Home Rule movement reached its pinnacle at this point.

This movement became memorable for two of its major contributions. Firstly, it brought the Congress’ ranks together. Mrs. Besant successfully brought together moderates and extremists, in a way that the Congress’s two wings became closer.

As a result, she was able to undo what had occurred in Surat in 1907. Second, it had a significant impact on the Congress’s character. It effectively pushed Congress to learn how to use methods of “demand” and “agitation,” rather than the older ways of “petition” and “prayer.”

When Lala Lajpat Rai observed, he said “India of 1917 was different from India of 1907.”, he was expressing his gratitude for the transformation, furthermore he added “We use to fight for crumbs in 1907. We are no longer pleading for concessions, but rather for rights in 1917.“

The force and vigor of the Home Rule Movement, which had been visualized as a “pioneer movement” to do the “spade work” dissipated and eventually lost its identity in the Non-cooperation Movement of 1921, as Gandhiji became more involved in politics, infusing greater tenacity and vigor into the activities of the Congress.

Significance and Impact of The Home Rule League Movement

The demand for Home Rule was clear and powerful, but it had the major drawback of being difficult to meet in the short term. Annie Besant had restricted her room for maneuver by first demanding the maximum; any attempt to adjust her tactics in relation to the British exposed her to charges of heresy from her supporters.

Mrs. Besant and Tilak eventually succeeded in provoking their supporters by boosting agitation to the point where passive resistance was required, then repudiating this goal, thereby generating much of the steam that would feed Gandhi Ji’s campaign of Satyagraha in 1919.